The proposal would improve connection and increase waterfront access in the Bronx.
Courtesy DCP
Only a few weeks before administrations changed hands at the mayor’s office, New York City released a comprehensive inter-agency report seeking to overhaul the Sheridan Expressway, the short but divisive freeway that cuts through the southern Bronx. This new study, which solidifies a number of recommendations introduced last spring, is part of a larger effort to reinvigorate a part of the borough that has been split apart by the unsightly expressway, creating perilous pedestrian crossings and exposing residents to hazardous air pollution. The scope of this report is more far-reaching than simply the revamping of the Sheridan. It also calls for rezoning to allow for mixed-use development, which the agency says will lead to an increase in jobs.

Plan showing the segment of the Sheridan proposed to become a boulevard.

City Planning (DCP) worked collaboratively with the New York City Department of Transportation, the Economic Development Corporation, and Housing Preservation and Development to put this study together, officially titled, “The Sheridan Expressway Study: Reconnecting the Neighborhoods Around the Sheridan Expressway and Improving Access to Hunts Point.” “We always knew this was a long-term plan and would span many administrations,” said Carol Samol, City Planning Bronx Director at DCP. “There are some things we can get quickly, and others that will take more time and require more major steps such as an environmental review and a public review process.” The proposal not only requires inter-agency teamwork, but also necessitates extensive coordination between city and state. Since the highways are operated by the state, these recommendations must be vetted and ultimately carried out by the New York State Department of Transportation. The 1.5-mile Sheridan Expressway—a remnant of Robert Moses’ failed plan to create a link between the Triborough Bridge and the New England Thruway—generally operates substantially below capacity but is often used by trucks. To relieve congestion and enhance the connection to the Greenway and Starlight and Concrete Plant parks for pedestrians, the city recommends rehabilitating the northern half of the expressway and turning it into a boulevard. The plan entails three new crossings to establish a direct path to the waterfront and also adding ramps to enable trucks to reach the industrial corridor at Hunts Point more easily. The city hopes that these improvements will set the ground work for the rezoning of the waterfront and attract new development, drawing more people back to the Bronx and righting a wrong from one of Moses’ most fractious urban renewal plans. “This study gave us a chance to be visionary about the neighborhood, but to also look at small changes that when all combined will have a powerful effect,” said Samol. “The South Bronx will be a better place.” 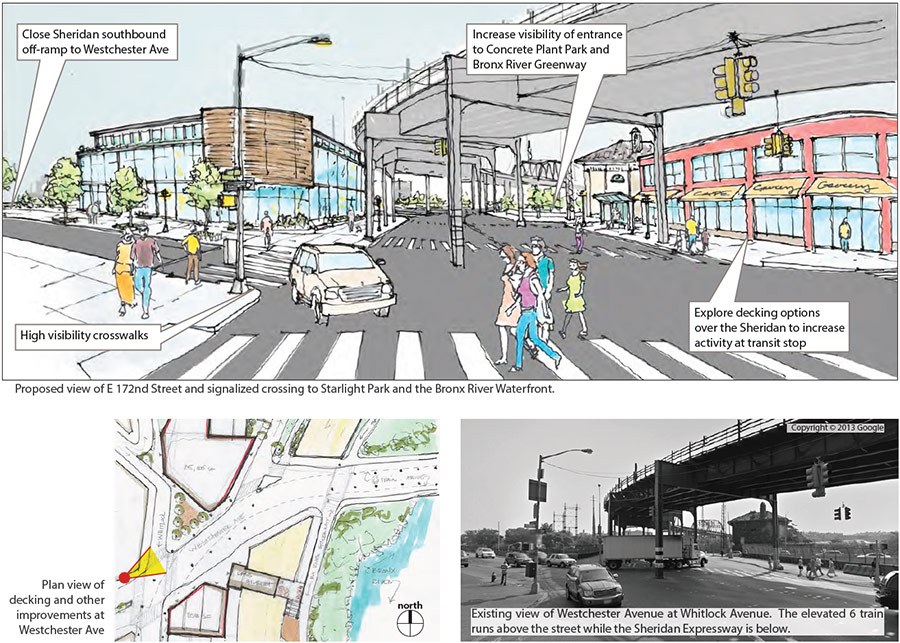